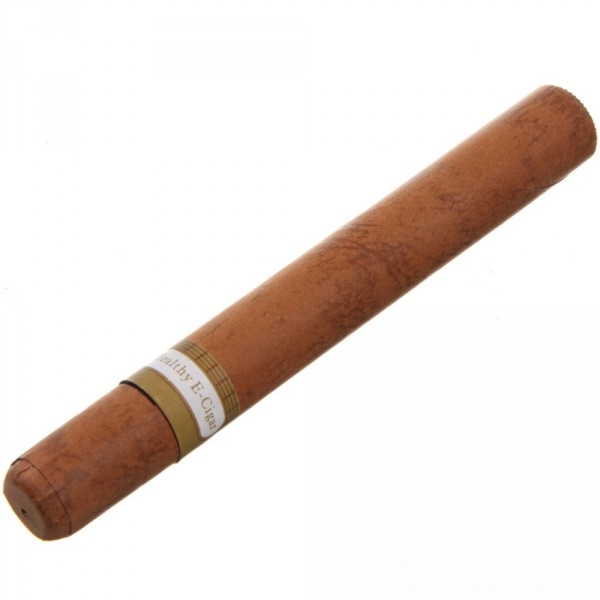 Electronic cigarettes have been a hype for years, but the electronic cigar is just starting to conquer the market. Maybe this is because most cigar smokers donâ€™t smoke as much cigars as cigarette smokers smoke cigarettes. Most tobacco cigar smokers donâ€™t even finish an entire cigar and throw the cigar away while half of the cigar is left. Well, thereâ€™s good news: e-cigars as well as e-cigarettes can be used for years. You donâ€™t need to waste your cigar after 10 drags!

The taste of a cigar is maybe even more important as the taste of cigarettes. The deep intense flavor of a cigar is what makes the smoker crave for a drag. However, the taste does also come with a smell which is not favored by many people. This might even be more annoying as the smell of tobacco cigarettes to some people. How does an e-cigar smell and how does it taste?

Different brands offer e-cigars: most of them offer a special Cuban or Havana flavor. Popular brands are Smoketip, Veppo and Epuffer. You can already get these types for 20 dollar and they will last a long time. The taste of the Cuban or Havana flavor is very similar to the taste of a real Cuban cigar. The manufacturers did everything to make sure it does. The only thing missing is the smoke which is replaced by the vapor with taste. The vapor might not give the exact same throat hit as a tobacco cigar, but it does have a very intense flavor. Itâ€™s like you can taste the tobacco itself on your lips.

The odor of tobacco cigars is a problem. People walk away when someone lights a cigar, even if itâ€™s outside and the smoker is far away. Electronic cigars, just like e-cigarettes, donâ€™t have these problems. Because there is no real smoke or real tobacco the scent is light and made of vapor. The taste is intense, but the odor whiffles away the minute you blow it out. Smokers of cigars might see this as a disadvantage, but it makes the cigar experience more social. People wonâ€™t mind that youâ€™re using e-cigars nearby.

Most cigar smokers are men, but there are two types of male cigar smokers: the men above 40 years old whoâ€™ve been smoking cigars for a long time and like to enjoy a whole cigar. Theirs is also the group of younger men who donâ€™t smoke tobacco cigarettes, but do like the taste of a cigar once in a while. This last group doesnâ€™t use more than 15 drags from the cigar. Saving it for later doesnâ€™t work with cigars, because it goes stale very quick. Therefor the cigars are thrown away: such a waste! E-cigars can be used whenever you want and how much you want. You can take a drag and leave it for weeks before you use it again. The perfect solution for a sporadic cigar smoker.

Most of the people know the risk of tobacco cigarettes: not only for the smoker, but also for its environment. The second hand smoke of tobacco cigarettes could already harm children or colleagues. The smoker itself is increasing his risks every drag he takes. Although cigars are less popular than cigarettes, the same risks and harm is effective for cigars as well. The tobacco is the nasty component. Electronic cigarettes and electronic cigars donâ€™t contain tobacco, but only nicotine. This means you wonâ€™t inhale tobacco when you use an e-cigar. However, the nicotine is something you need to be very conscious of. A lot of people, who smoke tobacco cigars, donâ€™t smoke tobacco cigarettes. This might mean that they donâ€™t get a lot of nicotine in their body, at least not as much as a fulltime smoker does. In e-cigars and e-cigarettes youâ€™re able to control the amount of nicotine yourself. You can adjust it to the amount youâ€™re used to or even choose to leave the nicotine out. If you want to give e-cigars a try, make sure you handle this the right way. After this, itâ€™s time to poor yourself a glass of rum and enjoy your Cuban e-cigar!